Misinformation in the media

Hi this is Joanne Williams, Manager of Next Generation Psychology.  Today, I want talk about the misinformation or even scam sites, about Emotional Support Animals certification in 3 areas that I have observed: the media, the airlines and popup internet companies.

I read a FB post this morning that Really got me going….that said this is a scam and I don’t recommend, if they just give a certificate,  This site should be shut down. I couldn’t agree more with PAM.

​This got me thinking and I see three areas of Misinformation that is being spread about ESAs certifications. Popup internet companies, selling products, the airlines and in sensationalized media.

I want you to be educated on How to NOT be fooled about this misinformation and this is the # 1the reason I am educating You as part of our free series on What you want to know, but didn’t dare to ask about ESAs. Or The Real Truth about ESA’s.

I did my own research and read and studied the 2 Federal laws that cover having an ESA.  The 2 laws seemed very clear to me on what was needed. 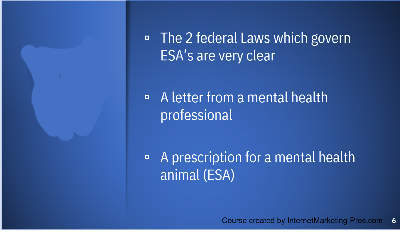 The pictures are powerful and really made people believe that there IS NO clear law that the airlines so that the airlines can stop ridiculous animals to be on board.  Instead, they perpetuated the misconception that people were abusing the law.  The airlines did not seem to want to accommodate people with an emotional Disability and wanted to scare people about not brining on their ESAs. ​

​There were stories about Turkey’s, a pig or a miniature horse going on a plane.

​I began to see the misinformation that was being put out in the internet sphere that all you need to do is to register your animal to have it become an ESA, or selling products over providing the required service of speaking with a Mental Health Professional and having a true evaluation to have the therapist certify that the person has a psychological diagnosis, like panic, social anxiety or specific phobia around flying, PTSD from war or traumatic experiences that significantly affect their life today.

​I read in the Tampa Times that the Police Department had responded to 5200 calls involving a person the throes of a mental health crisis. Sherriff Dugan reported “ There is, in my opinion a  crisis in our society and my concern is not enough people are concerned about it.

​Or the medias constant making fun of people who need their animal for comfort or security to go into public, as a punch line.  If the story in the news doesn’t show both sides, If it doesn’t look behind the scene to the person who may have anxiety from a war experience or a rape or a traumatic assault, to not go anywhere by themselves because of PTSD symptoms of anxiety or depression.

These kinds of grim statistics drives me to make a simple but very helpful suggestion about how can we use our animals to help us in the simplest, easiest way to improve our mental health, namely it is time to quit judging people with ESA’s.

Misinformation continues with the airlines...

last few years and, in the media, that the Department Transportation (DOT) is cracking down on the abuse by people flying with animals. Which was not true.  The DOT has not changed any of the law that has been around for 33 years.  The airlines finally started taking some responsibility recognizing their role in making sure that esa had a letter and were safe and appropriate for the flight.

I think that talking about ESAs is captivating to people and gets a lot of buzz for the airlines, no matter what they are saying, true or partial truths.

​Researchers say people who own dogs have a 24% lower risk of death than people who don’t own dogs.  This is in general, not for the most vulnerable populations with traumas of family history of mental illness.  Mental illness, is anxiety that interferes with your life, not going places.  Or depression that affects your concentration.  It doesn’t have to be you are homeless.  This is your neighbor or the angry person in traffic. Having an animal or an ESA in your life could save a life or help to calm the frayed nerves of a increasing stressed population.

​Instead the law is clear...

it is the airlines responsibility to ask for an ESA letter and they DO NOT have to approve any exotic animals on the plane, like spiders, pocket animals or snakes, etc. Or unruly, misbehaving dog.

The airlines made statements in the media that “those people” are abusing this law, where the airlines themselves were not asking for the required ESA letter at check in or stopping people from bringing on a pig on board. 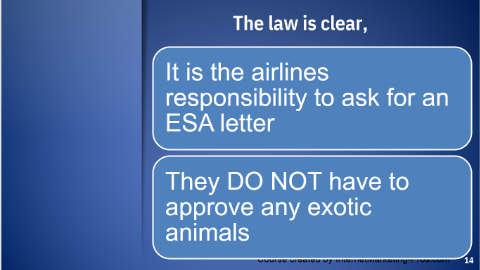 But, would they say that to someone with crutches, they shouldn’t be allowed to bring their crutches on board?  We would think that ridiculous.   When people with an ESA’s wounds my not be seen, like a physical one.

Almost all airlines instituted airline forms last year to be completed before bringing an ESA on the plane.  The airlines are  pushing every boundary about an ESA on the planes, like restricting weights of animals, breeds of dogs, limiting the number of animals per person, or  to the point that the DOT made a clarification in Aug. 2019, to hold the airlines responsibility to hold the spirit of the law that the airlines are to be accountable and accommodating to people with a disability.

​3 things you can do today to help.

1.     Be more thoughtful or less judgmental of someone with an animal on the plane.

2.     Suggest a Veterans group or Police department in our comment section, We will contact them and send them a video on how we can help.

3.   Smile at one person today and think a nice thought.